The following remembrance was prepared by Michael A. Romansky, J.D., OOSS Washington Counsel upon the passing of Louis I. Sheffler on Sunday, June 15, 2015.  Lou was one of the first non-physicians to serve on the OOSS Board of Directors and was instrumental in shaping the ASC benchmarking and educational programming for the entire ASC team, always with a focus on improving patient care. He co-founded American SurgiSite Centers, Inc., and served as Chief Operating Officer, providing leadership and support to its 13 affiliated ASC.

It is with great sadness that I share with you the news that Lou Sheffler passed away this week after a courageous battle with cancer. He was 65 years old.

Lou was a close friend of mine. I met him in 1983 at the third annual OOSS meeting in Grand Cypress, Florida, and for the next decade, we traveled together from workshop to clinic to symposium, extolling the virtues of outpatient ophthalmic surgery. Lou journeyed to Washington on innumerable occasions to assist me in my advocacy efforts on behalf of our Society. He was a great teacher and an integral part of our Society’s educational programming. Having developed or managed more than 150 ASCs, he brought exceptional business acumen to OOSS’s leadership deliberations and to all of us who sought his advice. As our Board would vigorously debate reimbursement and regulatory issues, Lou always reminded us that, first and foremost, we are advocates for the patient. One of our Board members recently referred to him as “the conscience of OOSS.”

When Lou entered the ASC development business 35 years ago, there were fewer than a dozen ophthalmic facilities in operation. While there were other talented consultants and architectural firms engaged in this work, Lou brought to the table the experience of having been an orderly, a scrub nurse, and ultimately, a hospital unit manager charged with expanding a facility’s surgery department from five to nineteen operating rooms. He often said, “You can always create more money, but you can never create more time.” His designs – whether for facilities with one or two or twelve operating rooms or 5,000 or 12,000 feet – always focused on efficiency in space and surgeon time, state-of-the-art technology, effective inventorying, sound practice and financial management, and superlative patient experience. Lou never hoarded his invaluable experience and expertise. With characteristic generosity, he made his early designs available gratis to OOSS members and exercised a career-long practice of graciously answering the calls of anyone, client or non-client alike, with a question or concern about the ASC.

Lou never invented an ophthalmic instrument, nor did he ever extract a cataract. Yet, in his own way, he deserves a space alongside the likes of David McIntyre and Douglas Williamson and Dick Mackool as a visionary in this health care revolution we know as outpatient ophthalmic surgery. He always adhered to his core belief that a patient should be afforded the opportunity to have surgery in a facility that offered the highest quality and most affordable care in a safe and patient-centered environment. 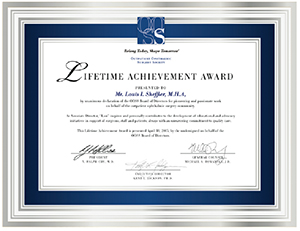 I had the pleasure of spending time with Lou outside of our professional endeavors. Lou was a Renaissance man. His passions were diverse, encompassing the New York Yankees and Giants, the fine arts (particularly the Metropolitan Opera), fine wines (only red), and sailing. He was a devoted family man, sharing stories recently about his “dates” with his lovely daughter Cara – bike rides at Jones beach and seats at Wagnerian operas. He adored Nancy, his incredible wife, companion and soul mate for almost half a century, admiring her strength and joie de vivre and relishing her sharp wit and sense of humor.

I visited with Lou six weeks ago at his home in Harrington Park, N.J., and presented him with the Outpatient Ophthalmic Surgery Society’s first Lifetime Achievement Award. He welled up and, with a twinkle in his eye and a broad smile, he quipped that he was glad that the award wasn’t being made posthumously. Lou reminded me that he and I were scheduled to attend the Nationals/Yankees game at Yankee Stadium on June 10. He took delight in hosting me for my first trip to the House of Ruth, like I was a little kid. Regrettably, Lou’s health prevented us from attending. Yet, despite the pain and fatigue, with assistance from Nancy, he kept in touch, advising OOSS Executive Director Kent Jackson, the Board, and me regarding a plethora of OOSS regulatory and business issues. His boundless energy and devotion to our mission served all of us until the day he passed away.

Lou Sheffler was a friend of mine – and a friend to each and every person who ever put spade to ground to build an ophthalmic ambulatory surgery center. We will miss you, Lou.

Access the full array of resources and tools offered through your Outpatient Ophthalmic Surgery Society membership.